Bridal couples are opting for less-formal wedding receptions, inviting fewer people, but spending more per guest, according to The Knot’s 11th annual "Real Weddings Study."  They're also seeking out non-traditional wedding venues and pushing back on time-honored traditions, such as tossing the bouquet. 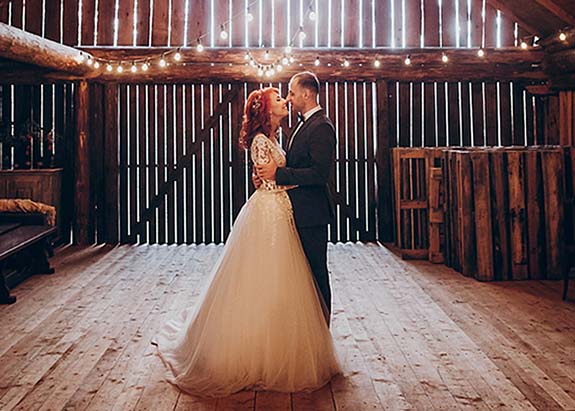 We also learned that the engagement ring — at $5,764 — remains the second-highest-priced item on the list of wedding expenses, with the reception venue claiming the top spot at $15,163. Interestingly, The Knot also defined a sub-group of "high spenders," whose wedding expenses exceeded $60,000 in 2017. Of that group, the average price of the engagement ring was $13,933.

“Weddings in 2017 showed us that couples are focused on guests, as we see them pulling out all the stops to create a truly memorable experience for their wedding attendees,” said Kristen Maxwell Cooper, editor in chief of The Knot. “Couples are also shifting away from formal affairs to create an experience that’s truly reflective of their personalities, and infusing more unique and unconventional ideas—from their venue and invitations to food, entertainment and more.” 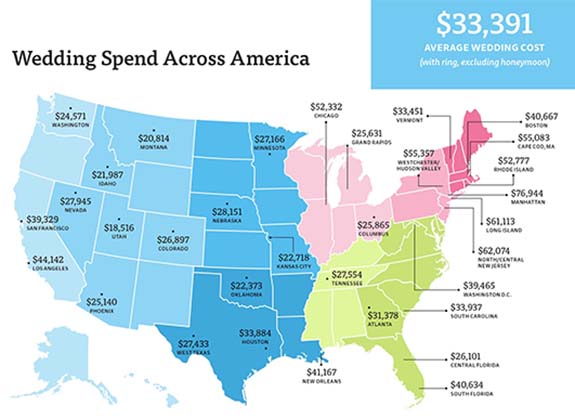 The average number of wedding guests in 2017 is down to 136, compared to 149 in 2009, while the cost per wedding guest reached an all-time high at $268 (up from $194 in 2009), according to the survey. Couples are looking to create the ultimate guest experience with photo booths, sparklers, selfie stations, games, musical performances, wine and liquor tastings, magicians and more.

The Knot also noted that some time-honored wedding reception traditions are seeing a decline, with fewer than half (49%) of brides opting to toss a bouquet (down from 53% in 2016) and only 37% of grooms choosing to toss a garter (down from 41% in 2016). Even the ubiquitous cake-cutting is seeing a bit of a push-back with 85% of couples in 2017 saying that it was part of their ceremony (down from 88% in 2016).

On the other hand, bridal couples said it was still important to infuse their heritage, culture and/or religion into their special day. Twenty-one percent of couples incorporated a traditional cultural element, including a Chinese tea ceremony, Irish bagpipers, Moroccan belly dancers and traditional Hindu ceremonies. 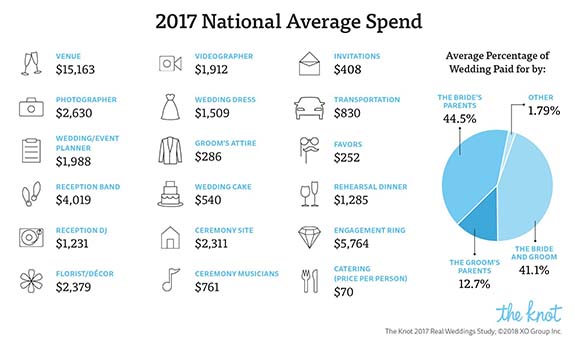 Credits: Image by BigStockPhoto.com. Infographics courtesy of The Knot.