More than 200 million visitors have marveled at the beauty and majesty of the Hope Diamond since jeweler Harry Winston donated it to the Smithsonian Institution in 1958. What most of those visitors don't know is that the Hope bears a complicated, multinational lineage that connects it with the stolen French Blue and an earlier incarnation called the Tavernier. 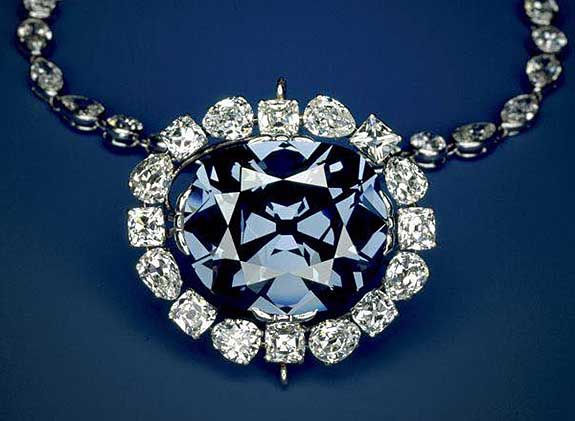 On Friday, the Smithsonian celebrated the 20th anniversary of the Janet Annenburg Hooker Hall of Geology, Gems and Minerals — and its most popular exhibit — by revealing replicas of what the Hope Diamond looked like before it was the Hope.

“After many years of work, we have revealed some new insights into the Hope Diamond’s origins,” said Jeffrey Post, chair of the Department of Mineral Sciences and curator of the National Gem and Mineral Collection at the Smithsonian’s National Museum of Natural History. “With these remarkable replicas, we can now see the Hope Diamond as King Louis XIV saw it more than 300 years ago.”

The cubic zirconia replicas are the result of a decade-long research project conducted by Post, in collaboration with Professor Francois Farges of the Muséum National d’Histoire Naturelle, and renowned New York-based lapidary, John Hatleberg. Eventually, they will go on display alongside the genuine Hope Diamond.

Researchers believe the Hope Diamond's origin can be traced back to 1642, with the discovery in India of a beautiful blue rough diamond. It was crudely finished and weighed 115 carats when it was purchased in 1666 by French merchant Jean Baptiste Tavernier, at which time it became known as the Tavernier Diamond.

French King Louis XIV bought the Tavernier Diamond in February 1669 and ordered it to be recut. The result was a 69-carat heart-shaped stone that would be known as the French Blue.

In 1792, the French Blue was stolen from the royal treasury in Paris. Its whereabouts remained unknown until a large blue diamond appeared in 1839 in the collection of Henry Philip Hope, a London banker and gem collector. Post and his associates are confident that the antique cushion-cut Hope Diamond, at 45.52 carats, is derived from the French Blue.

In 2009, a 17th century lead replica of the French Blue was discovered at the Muséum National d’Histoire Naturelle in Paris. It had been misfiled under the category of "lead specimens." Scientists used computer modeling of the lead replica to simulate what the actual jewel looked like during the reign of Louis XIV.

“Because of the information that we have now, the technology that we have available to us and some skilled people, we can actually produce a replica for the first time that will show us what [the Tavernier Diamond], the French Blue diamond and, of course, the Hope Diamond look like side by side,” Post told WTOP.com.