Hey, November Babies! Your Topaz Birthstone Has Been Misunderstood for 2,000 Years

If your birthday falls in November, you can delight in the fact that the much loved — but often misunderstood — topaz is one of your official birthstones. Revered for more than 2,000 years, topaz was referenced in the texts of Roman scholar Pliny the Elder and appeared five times in the King James Bible. 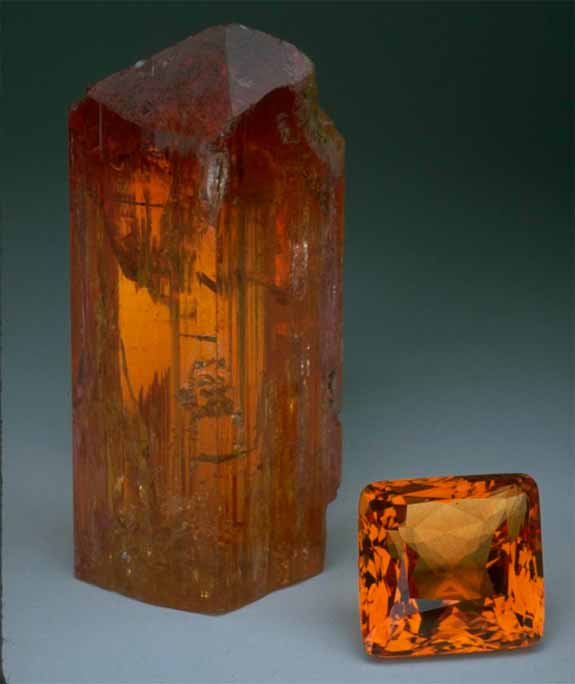 Interestingly, the yellow stones mentioned in these ancient writings may not have been topaz at all. You see, before 1950, most "gem experts" shared the misconception that all yellow gems were topaz and that all topaz was yellow.

Now we know that neither assumption was true.

Topaz can be seen in a wide array of warm colors, including brownish-yellow, orange-yellow and reddish brown. It’s also found in white, pale green, blue, gold and pink. Many yellow stones, we've since learned, are part of other mineral families, such as citrine (the other November birthstone), which happens to be a variety of quartz.

The highly prized “imperial topaz” displays an intense golden to reddish-orange color and is found primarily in Ouro Preto, Brazil. The imperial topaz specimens shown in the photo, above, are part of the Smithsonian's National Gem and Mineral Collection. The crystal weighing 875.4 carats stands next to a faceted gem weighing 93.6 carats.

Topaz gets its name from Topazes, the ancient Greek name for a tiny island in the Red Sea. The island is now known as Zabargad Island, or St. John's Island, and is controlled by Egypt. It is very likely that the "topaz" mined there in ancient times was actually a yellow-green variety of peridot.

According to the American Gem Society, Russia’s Ural Mountains became a leading source of topaz in the 19th century. The prized gemstone mined there was named imperial topaz to honor the Russian czar, and only royals were allowed to own it.

Brazil is the largest producer of quality topaz, but the stone is also mined in Pakistan, India, Sri Lanka, Russia, Australia, Nigeria, Germany, Mexico and the U.S (specifically California, Utah and New Hampshire). Topaz rates an 8 on the Mohs scale, making it a durable and wearable gem.

Topaz is a talisman for the sign of Sagittarius and is the suggested gift for the 23rd or 50th wedding anniversary.