Beleaguered actress Nicole Kidman finally revealed why she clapped like a seal at the 89th Academy Awards. It was all about the rings. 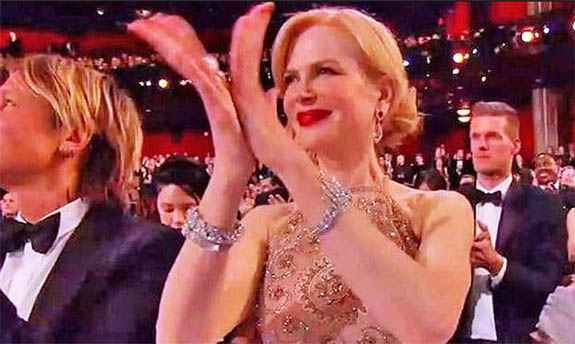 In the two weeks since the broadcast, social media has exploded with memes trying to explain Kidman's strange clapping behavior where she essentially slapped the bottom of her palms together while splaying her hands apart. Critics wondered why she had such a hard time bringing her unusually long hands together, sparking comparisons to a seal and The Grinch.

If Warren Beatty and Faye Dunaway hadn't incorrectly named La La Land, instead of Moonlight, as the Best Picture winner, the lead story of the night would have been about Kidman's clapping disorder. 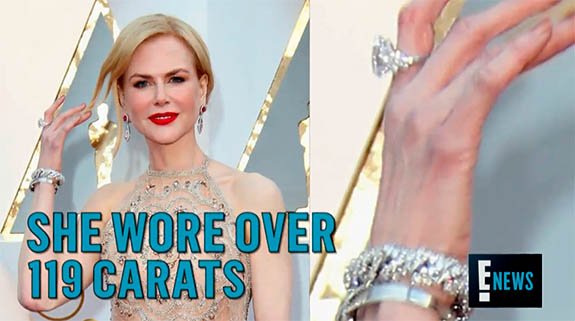 But this past Wednesday on the Australian "Kyle and Jackie O" radio show, the actress confirmed that the expensive jewelry she was wearing was to blame.

"It's because of the rings you idiots," Kyle told his radio audience. "That's why she's clapping like that. She doesn't want to damage the jewels!"

Kidman chimed in, "Yes, Yes! I'm so glad you clarified that because it was really awkward! I was like, 'Gosh, I want to clap. I don't want to not be clapping.' Which would be worse. Right? 'Why isn't Nicole clapping?'"

Specifically, Kidman was worried about the safety of a 13.58-carat pear-shaped diamond ring that had been lent to her by Harry Winston. It was part of a larger diamond ensemble that weighed in at 119 carats. Red carpet photos taken before the ceremony showed Kidman wearing two large rings, one on the index finger of her right hand and another on the ring finger of her left hand.

"So, therefore I'm clapping, but it was really difficult because I had a huge ring on that was not my own, but it was absolutely gorgeous, and I was terrified of damaging it!" she said.

Kidman was a little taken aback by the viral reaction to her clapping display.

"It's like, [are] there not more important things to be focused on than the seal clap?" she asked.

Kidman's role in Lion had earned her an Oscar nomination for Actress in a Supporting Role. The Oscar eventually went to Naomie Harris for her role in Moonlight.

See the Entertainment Tonight report below...