Wrestling superstar John Cena proposed to longtime girlfriend and tag team partner, Nikki Bella, in front of a thrilled house at WrestleMania 33 on Sunday. After defeating The Miz and Maryse in a featured bout, Cena called Bella to the center of the ring, where the 6'1", 250 pound powerhouse went down on one knee and presented Bella with a 4-carat diamond ring. 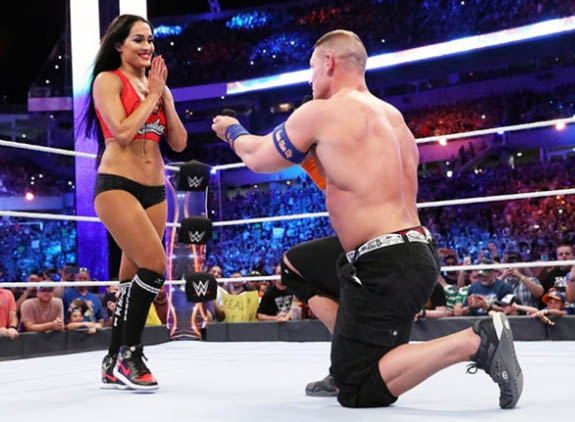 "I have been waiting so long to ask you this," Cena said, as he juggled the ring mic in one hand and the ring box in the other. "Stephanie Nicole Garcia-Colace, will you marry me?"

Cena, 39, used Bella's non-stage name during his proposal. His birth name is John Felix Anthony Cena Jr. The couple had been dating since 2012. 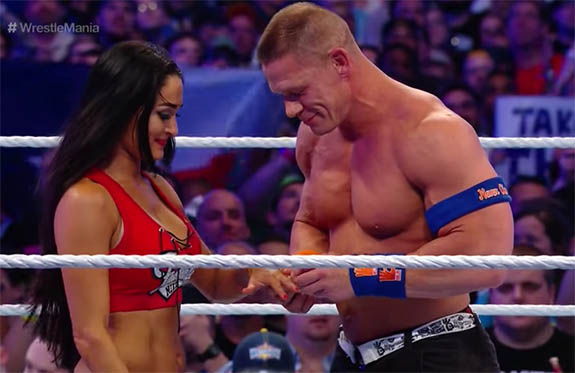 Bella nodded her approval and then teared up as Cena placed the sparkler on her left ring finger. The couple embraced, basking in the cheers from adoring fans at the sold-out Camping World Stadium in Orlando, Fla.

Celebrity stylist and diamond expert Michael O'Connor told UsMagazine.com that the ring reflected a classic style with a sporty twist — making it perfect for the 33-year-old wrestler, one of the popular Bella Twins. Fabricated in either platinum or white gold, the ring features a 4-carat round diamond accented by a diamond-embellished band.

"The style is a classic solitaire resting upon a band of diamonds," O'Connor continued. "What gives the ring the sporty twist is that the center diamond is held with six prongs — as opposed to four prongs — to keep it safer. The same is true of the channel-set band. The channel setting modernizes the look, but also keeps the diamonds safer, because they are set deeper into a channel, without prongs, which is perfect for a more active woman."

O'Connor placed the value of the ring at approximately $85,000.

Bella, who shares a Twitter page with her real-life twin sister, Brie, told their 2.93 million followers how excited she was to be engaged to the love of her life.

"My Prince Charming made me his Queen in a place we call home," she wrote, punctuating the sentence with heart and diamond ring emojis. "Last night was truly unforgettable. A dream come true!"

Cena, Bella and guest ring announcer Al Roker shared a red eye back to New York on Sunday night so they could all appear on NBC's Today Show on Monday morning. 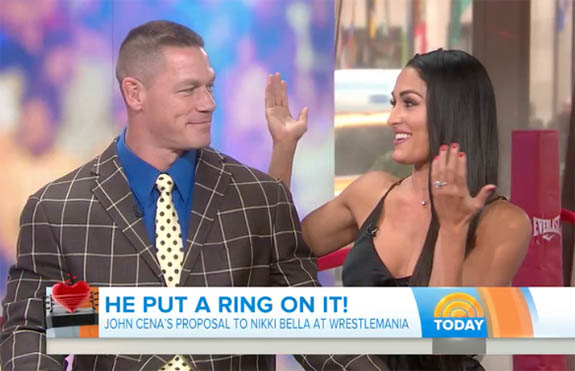 Cuddling next to her beau on a Today Show set that was made to look like a wrestling ring, Bella said, "I never actually would have thought that he would have proposed in front of all those people, but that's home for us. WWE is our home, it's where we met, it's our passion, it's our life. Honestly, I could not ask for it to be any other way."

Added Cena, "I found the absolute right person. I found a strong person [who] I consider an inspiration, an equal, somebody who when I'm feeling down picks me up... It took a person that strong to change my view on life."

When a Today Show host pressed Bella for a wedding date, the Total Divas star admitted she was ready to "get this party started."

Check out the clip of Cena proposing to Bella Sunday night at WrestleMania 33 in Orlando...